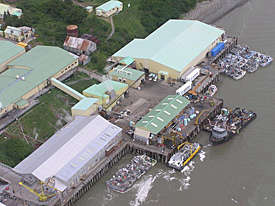 Juneau, Alaska (KINY) – The Alaska Department of Commerce, Community, and Economic Development announced a grant program to distribute $30 million to the seafood and shellfish processing sector in Alaska. Alaska.

Commissioner Julie Sande spoke to News of the North about the program.

“Now, being a new commissioner, having the ability to look back and say, okay, did we inadvertently miss some people? Were there any people injured that we couldn’t reach at that time there? and so this funding for me is just very exciting because I think the seafood processors that were operating in Alaska incurred substantial costs.”

Project manager Laura Vaught broke down the impact of COVID on processors, she cited results from a 2020 McKinley Research Group survey.

“Processors surveyed reported approximately $70 million in COVID mitigation costs in 2020 and they estimated they would spend over $100 million in 2021. So this funding will help reimburse some of those costs for processors. of seafood, large and small, and will help them regain some of those substantial expenses they had to incur to keep operating and moving forward with their industry.”

Commissioner Sande said the funding will provide critical assistance to an industry that is a vital component of Alaska’s economy.

We have food, seafood processors all over our state, and just knowing the impact that’s had on those people is truly heartbreaking, especially considering everything they’re doing in each of the communities, but also just a central part of our economy. We produce over 60% of the annual seafood harvest in the United States and we have 150 coastal producers in Alaska,” she said. So when I think about the enormity of that, you know, they’re generating $5 billion to $6 billion in economic activity in Alaska.”

The application period for the program will open on April 5 and end on May 5.

They said this was not a first-come, first-served grant opportunity, and eligible seafood processors had a 30-day window to apply, and that Award amounts would be determined once all applications were received and assessed based on demonstrated need.

How to Sync Zoom Meetings with iPhone and iPad 2022 Calendars