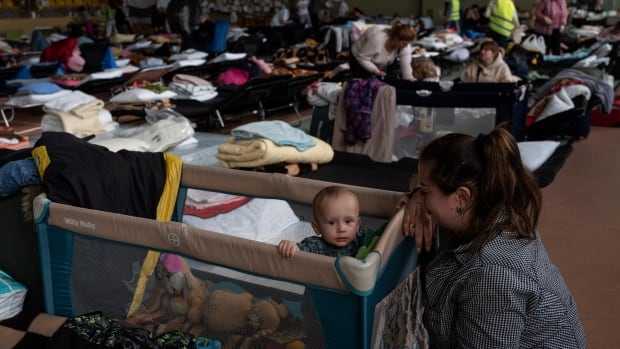 As the war in Ukraine continues, Manitoba is waiving the $500 fee for Ukrainians trying to enter the province through the Provincial Nominee Program.

Applications from Ukrainians are being fast-tracked as much as possible through the Manitoba Provincial Nominee Program, Manitoba Advanced Education, Skills and Immigration Minister Jon Reyes said Tuesday.

He classified the applications received as “high priority”, but was unable to say precisely how many applications this includes.

Two weeks ago, the province said just over 100 Ukrainian applications were in the queue for the Nominee Program.

“We will welcome as many people as we can humanly manage, but this will have to ensure that we engage with [provincial] organizations and the federal government,” Reyes said.

The Provincial Nominee Program is an expedited immigration option, which allows provinces to nominate people to immigrate. It is generally used to encourage people with the necessary skills, education and work experience to settle here.

The provincial government said earlier this month it was using the program to prioritize applications from people trying to flee Ukraine, in light of the ongoing conflict there.

The Red Cross and the UN refugee agency say that following Russia’s invasion of Ukraine, which began on February 24, millions of people are facing food shortages and medicine, as well as the immediate threat of conflict from bombings and air strikes, with millions displaced across the country.

More than three million people from Ukraine have fled to neighboring countries in what the UN has called Europe’s biggest refugee crisis since World War II.

More than 7,000 Ukrainians have arrived in Canada since January 1, according to Immigration, Refugees and Citizenship Canada, although the exact number of arrivals since the start of the war in Ukraine remains unclear.

Reyes said admitting refugees is a federal responsibility, but said he was working with Canada’s Immigration, Refugees and Citizenship Minister Sean Fraser to bring more Ukrainians to Manitoba. .

The province has online information on the special stream of the candidate program for Ukrainians looking to come to Manitoba,” Reyes said.

“We know there are a lot of people who want to come to Manitoba,” added Reyes. “We know that immigration is a crucial catalyst for our economy.”

He also noted that “there are many Ukrainian and non-Ukrainian Manitobans who want to help these people.”

Reyes admits there will be delays in processing applications, but could not determine how long those delays will last.

The Provincial Nominee Program received 6,275 applications in 2021 – the highest number of applicants since its inception in 1998 – Reyes said last month.

NDP MP Mark Wasyliw (Fort Garry) noted that the opposition party had previously urged the Progressive Conservative government to waive the $500 nomination fee and applauded them for doing so on Tuesday.

He said it was a good start, but more needed to be done, including relaxing the language requirements of the program.

“We were calling for this at the start of the invasion,” Wasyliw said.

“We are now on day 20 and it shouldn’t have taken this government 20 days in this invasion with three million Ukrainian refugees, mostly women and children, and seeing the mass horrors…for get them to act.”

While Reyes said he’s happy with the current staffing and funding of the provincial nominee program, Wasyliw said the province needs to hire more immigration and settlement workers in anticipation of what’s to come. could be a wave of Ukrainian immigrants in the coming months.

The Ukrainian Canadian Congress said it had the capacity to settle thousands of Ukrainian immigrants. The problem, Wasyliw says, is that the necessary resources aren’t in place to help these immigrants integrate easily into life in Manitoba.

“Manitobans want to be part of this solution. They are lining up to do it,” he said. “They need their government to partner with them to make this a reality.”

Liberal Leader Dougald Lamont also said the province lacks the capacity to integrate a flood of Ukrainians and expects to see many new immigrants in distress after their arrival.

“We don’t have the capacity to do that right now,” Lamont said. “We need the government to actually invest money in settlement services.”