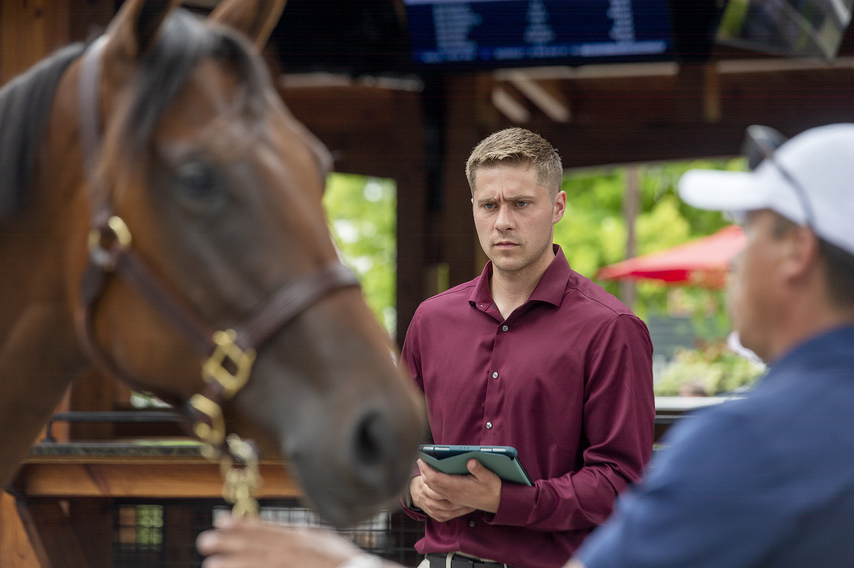 Alex Sausville is up for a horse ride.

As a senior guard for the Scotia-Glenville men’s basketball team in 2014, he went 8-for-13 to 3-pointers as the undefeated Tartans defeated East High to win the Class A state championship in the Glens Falls Civic Center.

But to say he’s “up” for a horse ride these days has nothing to do with shooting creative shots and everything to do with the night shift — 6 p.m. to 7 a.m. — to observe pregnant mares.

He recently completed the six-month Thoroughbred Breeding Management Course at the Irish National Stud (INS) in County Kildare, Ireland, during which one of his responsibilities was to oversee mares giving birth and assisting with the birth.

His eight 3-pointers in the 2014 championship game were a tournament record; his eight “helpers” on colt patrol at the INS was a one-night personal best.

“You’re starting to see legs sticking out, and we have to go,” Sausville, 26, said Aug. 2 during lunch at BL’s Tavern on Front Street in the Palisade.

Sausville was making a short visit home to see his family, watch the races at Saratoga Racecourse with his father, Mark, and observe a blood agent at last week’s Fasig-Tipton Selected Yearlings sale.

Then he was back in Ireland for the next phase of his quest to build a career in racing management, which begins on Monday in the Godolphin Flying Start programme, an exclusive and prestigious two-year management and leadership course which will take Sausville and his 11 classmates in England, Kentucky, Australia and Dubai, in addition to Ireland.

Sausville is the only American to be chosen for this class, a tremendous privilege for someone who didn’t grow up in a racing family (other than his dad taking him to OTB as a kid), but also a measure of Sausville’s commitment to the career path he has chosen.

“I mean, I kept INS students awake a lot during the class work windows, because I had Aussie runs at 3am. They say, ‘Who’s watching the race now?’ ‘Nobody.'”

“He realized early on in his decision to get into horse racing that he was really going to have to work twice, three times as hard and put in that time,” Mark Sausville said. “I think a lot of that comes from the basketball program. It got a lot of it from me, unfortunately, from my days at Schenectady and watching how I would try to empower kids.

Mark Sausville was an assistant to Gary DiNola when Schenectady High won a state championship in 1998, then Mark took over the program for 12 years and won another title in 2001.

He was an assistant at Scotia, along with the late Glenn Stopera, who died last summer, at Giammattei when the Tartans won the State and Federation Championships in 2014 with a starting lineup of Joe Cremo, Scott Stopera, Dom LeMorta , Mike Palleschi and Alex Sausville. . (Scotia won another state title in 2015 after graduating from Sausville).

“When we went to the Belmont Stakes once and they sang ‘New York, New York’, I think that was the one shining moment for him where he was like, ‘Wow, this game is really , really exciting, if people can come here to do it,” said Mark.

“I never imagined he would study the breeding and racing results as hard as he did. ‘Hey, Alex, let’s take a break, let’s go play some tennis or shoot some hoops.’ said, ‘No, I can’t take a break now, dad. There’s something I might miss. Or, ‘I have 15 races in Japan that I still need to watch.’

In addition to classroom work and traditional lectures, the six-month INS program included hands-on experience in foaling and breeding.

Alex Sausville, one of 30 students from around the world living together in a hostel during the recently completed course, helped the mares with deliveries, if they needed it, and was on hand to help control the mating process. stallions.

“That’s one of the biggest benefits of the Irish National Stud course is that they put you in these different scenarios,” he said. “There are nights where you won’t get anything, and you’ll just sit there and walk and check mares all night and get nothing. And there are nights like that where you have a mare, you bring her back , you do it, you finish, you clean up, you sit down and the next one goes.

Prior to the INS program, Sausville bounced around a variety of stops as he built his base of knowledge and experience, what he calls “the zigzag that has become my life now.”

A graduate of St. John Fisher University who played basketball for the Cardinals, Sausville completed the University of Arizona’s year-and-a-half Race Track Industry program, which produced the likes of Todd Pletcher, Hall of Fame coach.

He has also participated in the Kentucky Equine Management Internship (KEMI) program, worked for the Breeders’ Cup, Stone Farm in Kentucky and in the Race Office at Colonial Downs in Virginia.

“I went from New York to Arizona, Arizona to Ohio for an internship, went back to Arizona,” Sausville said. “Kentucky. What was after Kentucky? Virginia, Colonial. Back to Breeders’ Cup in Kentucky, back to Florida for Todd, back home for a bit, then back to Colonial. Back to Kentucky with Hunter Valley and then from there to home and then to Ireland and now France is going to be a quick three day trip [prior to beginning the Godolphin Flying Start].”

Saratoga fans probably haven’t heard of most of the horses Sausville worked with in Ireland, but they will know them: Malathaat and Colonel Liam.

Sausville spent three months two winters ago working as a hotwalker for Pletcher at Palm Beach Downs in Florida, and was often responsible for chaperoning these two stars to and from the track for practices and guiding them through times of recharge after work.

Malathaat won the Ashland and Kentucky Oaks last year, then came to Saratoga and won Alabama en route to an Eclipse Award as the top 3-year-old filly in North America. She was second to Clairiere in the Shuvee three weeks ago.

“It was good,” Sausville said. “He’s a great guy to work for in that as long as you do what you have to do, he’ll let you work. There is no operation more structured or well managed.

“Malathaat was wonderful. She was very shy, but she was very nice and kind of got herself into things. I accompanied her to the track, when she came back, I picked her up, accompanied her, held her for her bath, then I walked her afterwards. Sometimes I had to sit in the cabin with her, and she would get her feet soaked and kind of help her back.

Being accepted into the Irish National Stud program was a big breakthrough for Sausville.

His roommate was Andrew Buick, brother of Willliam Buick, a Norwegian who is one of Europe’s top jockeys and who made his Saratoga debut last weekend winning the Saratoga Oaks Invitational on With The Moonlight.

Andrew Buick was among INS Sausville classmates who waited in the hostel kitchen as Sausville took the most important phone call of his career so far, a month and a half after the interview preliminary as part of the Flying Start application process.

“The application process is very daunting,” Sausville said. “So I was sitting in the hostel kitchen with all my classmates, having lunch as a group. If you get a phone call, you’re fine. If you get an email, you’re out. So the phone rings, you see this Irish number, and I ran out of the room, almost knocked my chair over and I’m outside and answering the phone.

It was Clodagh Kavanagh, the executive director of Flying Start.

“She asked me how I was and what I had been up to that day. Of course that day I went to pick up trash in a field,” Sausville said with a laugh. ‘she’s talking, I hear a knock on the window, and it’s Andrew, my roommate. He gives me a thumbs up, a thumbs down. She said, ‘I have good news for you, ‘ and I went like this [thumbs up], and I heard the whole kitchen applaud. It was a really cool feeling. When I got home they all stood up and gave me hugs.

“It’s been a dream for a while since he heard about it, and he’s met so many nice people across the network who have helped him out,” Mark Sausville said. “As for the program, I was in Ireland and talked to an old gentleman in a museum, and he just beamed when I mentioned the Flying Start. I never realized how important that was, especially for a kid who doesn’t come from a horse racing background. I think he’s very proud of it. »

The Flying Start’s mission statement, in part, “is to recruit the world’s most talented people and provide them with unparalleled professional training and experience, thereby achieving our vision of producing engaged leaders working in existing markets. and emerging markets contributing to the long-term success of the Thoroughbred industry.

Graduates have gone on to work as blood agents, trainers, administrators, broadcasters and property group managers for some of the largest operations in the world.

“They [Scotia basketball coaches] really emphasized pushing yourself and stepping out of your comfort zone, which Alex embraced if you want to be great at something,” Mark Sausville said.

“Right now the goal is to be a race director,” said Alex Sausville. “So working for owners unions and pretty much managing their stable. Eventually, I hope to run a racing and breeding business.

“I guess it’s the same thing that stems from basketball. It’s two years of training. That’s how I see it. I’m excited to take the course, but for me, I’m mostly looking forward to seeing what I can become in two years.

More from The Daily Gazette:

Categories: On the track, Sports, Sports