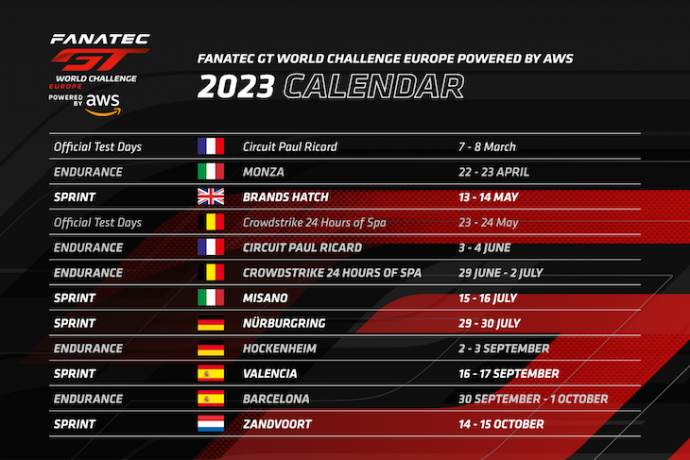 SRO Motorsports Group has rearranged its European calendars for the 2023 season following the decision to stage next year’s Belgian Formula 1 Grand Prix at Spa-Francorchamps on July 29-30, the date most commonly used by 24 Hours of Spa since 1953.

The changes mainly concern the Fanatec GT World Challenge Europe Powered by AWS and its flagship event, the CrowdStrike 24 Hours of Spa, originally scheduled for the same weekend in late July. As the race changes dates for its 75th edition, further changes were required to the calendars announced at Stéphane Ratel’s annual press conference at Spa-Francorchamps.

The traditional pre-season test days will take place as planned at the Circuit Paul Ricard on March 7 and 8, while the competition will begin with a three-hour Fanatec GT Endurance race at Monza. The Italian event will take place a week later than previously announced, moving to April 21-23. The Fanatec GT Sprint season will also kick off at an unchanged venue at a later date, with the annual trip to Brands Hatch moving back two weeks, to May 13-14. Both have been modified so as not to conflict with FIA World Endurance Championship events, with drivers entered in both series.

The official CrowdStrike 24 Hours of Spa test days are now scheduled for May 23-24, while the Circuit Paul Ricard 1000km will take place on its original date of June 2-4. The most significant change to the calendar concerns the flagship event. The 75th edition of the CrowdStrike 24 Hours of Spa is now scheduled for the weekend of July 1-2, with track activity beginning on Tuesday June 27 and continuing throughout the week.

The new date for the CrowdStrike 24 Hours of Spa means the annual visit to Misano moves back two weeks, to July 14-16. Next, Fanatec GT Endurance will make a welcome return to the Nürburgring (July 28-30), after which the series will pause for its traditional August break.

Racing will resume at Hockenheim from September 2-4. After successfully starting this term as an endurance round, the event will be part of the Fanatec GT Sprint calendar in 2023. Valencia retains its Sprint date of September 15-17, followed by the Fanatec GT Endurance Final at Circuit de Barcelona -Catalunya September 29-October 1.

The Fanatec GT World Challenge Europe Powered by AWS 2023 campaign will conclude with a Fanatec GT Sprint round in Zandvoort from October 13-15. The Dutch venue already staged the final in 2015, when it will be the first instance of a season-ending Sprint event since Barcelona did in 2016.

Other changes have been made to other SRO Championships. The GT4 European Series, which organizes all its events alongside Fanatec GT World Challenge Europe Powered by AWS, will now compete at the Nürburgring and not, as initially announced, at Misano. 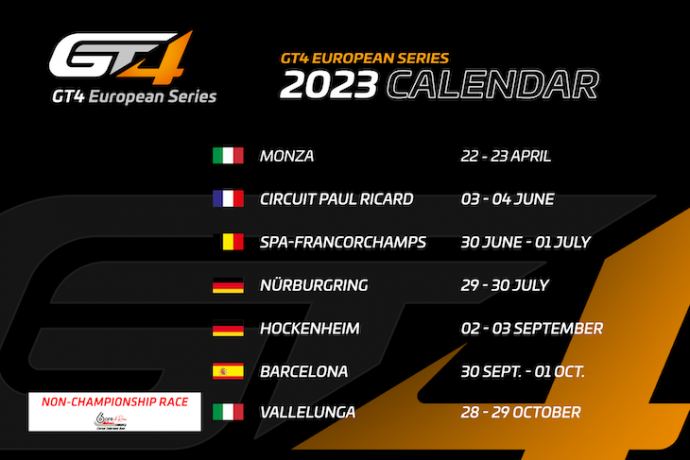 The Fanatec GT2 European Series also features a number of revised dates, with a slot for the Red Bull Ring round to be confirmed in due course. 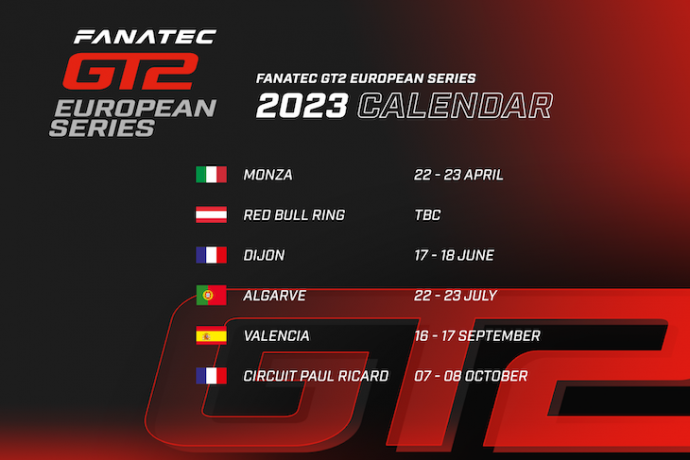 The FFSA French GT Championship and the FFSA French Touring Car Championship will move their round from Magny-Cours to avoid a clash with the Fanatec GT World Challenge Europe Powered by AWS, which will take place on the Nièvre circuit from 5 to 7 may. The Dijon (June 16-18), Val de Vienne (July 7-9) and Circuit Paul Ricard (October 6-8) events will all take place a week earlier than originally announced, while the full schedule remains subject to FFSA approval.

Across the Channel, the Intelligent Money British GT Championship has revised the dates of Snetterton (June 17-18), Portimao (July 22-23) and Donington Park (October 21-22), all shifted by one week.

The Eternal Endurance Race, a six-hour GT4 event centered around Rome, will take place as scheduled in Vallelunga on October 28-29, 2023.